Peter Watson is a Human Rights lawyer at the Legal Assistance Centre in Windhoek, Republic of Namibia.  In addition he is a consultant on environmental issues and has undertaken several appointments from various industries in Namibia, notably in the Mining Sector, advising and constructing legal compliance registers and undertaking environmental audits.

Peter has also been appointed as the Chairperson on the Lands Appeal Tribunal by the Minister of Lands and Resettlement, in terms of the Communal Land Reform Act, on several occasions. He graduated with a Bachelor of Arts degree in 1987, from the University of Kwazulu-Natal, Durban, majoring in Contemporary African Political Science, Industrial Psychology and Law and obtained a Bachelor of Laws Degree in 1993, becoming admitted and began practicing as an attorney for his own account in 1997. 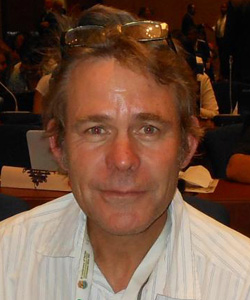